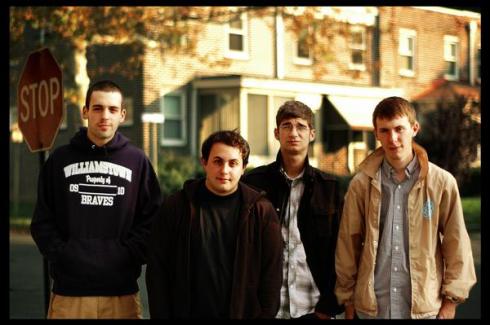 Straight out of South Jersey, Man Overboard is jumping into the music scene with their catchy lyrics and fun-loving attitudes. Newly signed to Rise Records, these guys are proving that they are more than just a small-town band. Don’t worry though, these guys are still down-to-earth Jersey boys. Check out this interview with Justin Collier and Nik Bruzzese from Man Overboard as they discuss heartbreak, touring around the world, and Beyoncé.

How long have you been a band?

NIK: That’s a hard question! We started in August ’08.

Best part about growing up in New Jersey?
JUSTIN: Diners.

NIK: Definitely Wawa. And Dunkin’ Donuts, plus the weather is beautiful.

JUSTIN: We got the shore, Wawa, diners, and pizza.

If you could pick just one song for someone to listen to, what would it be?

JUSTIN: And I think that portrays us well. It’s got a lot going on.

You guys are currently on tour with Fireworks on the All I Have Left To Offer Is This tour. How has your experience been so far?

NIK: When the tour is over I’m going to severely miss being around everyone. It’s been so much fun. It’s like every day you don’t have to worry about being bored. Everyone is cool as hell. I love everyone.

Best part about being on this tour?

JUSTIN: Not having a real job. Not being in school or working!

NIK: It’s cool because you don’t have to answer to anyone. I wake up and I go “Fuck the world!”  Basically we play songs to kids who like them and we’re like “Holy fuck, how did that happen?”
There’s a lot of talk that you guys are going to “blow up” in the music scene.  And after this tour, there is Japan, then Europe/UK.  As a band from a small town in Jersey, what’s your thought process like to the attention and new experiences you’re getting?

NIK: I feel like it hasn’t even hit me yet. I’m still on cloud nine from people singing our songs.

JUSTIN: We just think it’s cool that we can go to places like San Francisco and kids know our songs.

NIK: It’s just crazy. When we first started touring, it was with Transit and we shared a green van. So it was all of us and all of our friends, and just packed to the brim. We were just hanging out and partying our asses off, and that was fine with us. And now it’s like we’re going to Europe with Transit and we’re like, “What is happening? Are people liking us!?”

JUSTIN: So, I’m twenty-one and Lacy from Transit is nineteen, and we met three years ago…

JUSTIN: Well… a really long time ago when he was still in high school, and now we’re going to Europe together. It’s surreal.

Your latest album is Real Talk, which seems to revolve a lot around relationships. What was the inspiration for that record?

NIK: Broken heart syndrome. Zac wrote a lot of it and then we just take it and try to figure out how we want it to sound. We all bounce off each other really well.

JUSTIN: Zac gets mad at girls a lot, too.

NIK: Yeah, we all got fucked over when we were younger. We still probably are. Honestly, me and Zac have no lives, and Zac has been writing songs forever.

Was there a message you guys were trying to get across?

NIK: It was basically just telling people what’s good and saying what happened, like, if you relate to this, then maybe you’ll like it.

NIK: Like, if somebody sees it from one of our perspectives, then it might help somebody get through some shit. I know a lot of people have been saying it’s been helping them out, so that’s cool.

If you were the product of two bands joining together, what would those two bands be?

NIK: Not Aerosmith. Definitely Limp Bizkit, and then Papa Roach.

NIK: This is off topic, but we actually tweeted P-Nut, the bass player of 311, and he tweeted back. I was like… speechless!

JUSTIN: He said, “Much luck to the next-gen rockers.”

NIK: The Next Generation of Rockers, and I was like, “Fuck yeah!”

Who would you love to collaborate with?

NIK: I would love to collaborate with Chris Conley. That would be insane. And Steven Tyler.

NIK: I was gonna say that! It’s the sickest song.

Would you rather cover Lady Gaga or Beyoncé?

JUSTIN: Is that what she says?

This entry was posted on Monday, February 7th, 2011 at 2:55 am and posted in Interviews, News. You can follow any responses to this entry through the RSS 2.0 feed.
« Live Footage from Death to False Hope Fest 2011
Touché Amoré Posts Studio Updates, to Tour with The Menzingers, Title Fight, and Dead End Path »