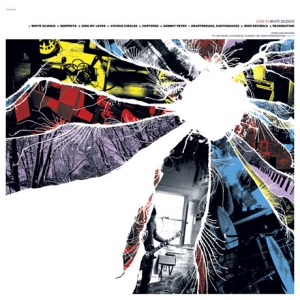 To say that Cave In’s previous discography has been allover the musical map would be a bit of an understatement. When the band began in the late nineties, they were more or less a better than average metal core band. Beginning with Creative Eclipses EP the band started a rigid program of experimentation that would confound any casual listener. Until their 2006 break up, they released recordings that could described anywhere between  Space Rock to Sludge/Doom and even had some old fashion Pop Rock thrown in.

Once the break up turned into a short hiatus, the band released Planets of Old in 2009. It was apparent that the band had turned a corner in their short absence. In only four songs, but Planets has every previous element of Cave In present. The band takes this as the foundation for White Silence to be built upon. Given the extra length of this release they are able to take their sound to all new levels of expansion and experimentation.
While listening to White Silence, you will never know you’re going to get. Sonically the album picks and chooses from allover Cave In’s past, and from track to track the band slithers in and out of these different sounds and approaches. The album kicks off with two quick tracks which are heavy on dissonant vocal and guitar effects. Before you can get used to that sound, the album segues into the 8 minute Sing My Loves, which sounds and feels like your ears are being consumed by a slow tsunami.

The tracks Centered and Summit Fever get the album rocking again, they are reminiscent to some of the  more raucous moments from the band’s side project Old Man Gloom. These tracks do a great job leading the listener to album’s latter half, from which there is no letting up. Heartbreaks, Earthquakes reveals an unseen side of Cave In. Imagine if there was a Cave In song recorded by the Sgt Peppers Lonely Hearts Club Band and that is exactly how this song sounds. The album’s last track, Reanimation, is heavy with the acoustic guitar strumming. It provides the listener with a somber end to the ride and it allows the listener to reflect on the interesting trip which Cave In has taken them upon.  A trip which was unrelenting with its constant flexing and changing of sounds, this record is definitely a treat for the ears.

This entry was posted on Monday, June 13th, 2011 at 6:38 pm and tagged with aaron turner, Caleb Scofield, Cave In, Hyra head records, stephen brodsky, White Silence and posted in News, Reviews. You can follow any responses to this entry through the RSS 2.0 feed.
« Ampere-Like Shadows
FYF Fest 2011 Announces Line Up »