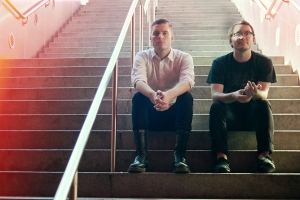 San Francisco’s Deafheaven has been fairly described as a black metal, shoegaze, or post-hardcore band, but it’s difficult to reduce it to a single genre. The band’s debut full-length Roads to Judah was released to much acclaim among the communities attached to these various alternative subgenres. The record was sprawling with atmosphere, with elaborate instrumental arrangements and brooding lyrics brimming with dark imagery. The writing on Sunbather, Deafheaven’s followup to Roads to Judah, is the work of two songwriters — three fewer than on the previous full-length, but with no less ambition. In fact, the record will be 22 minutes and three tracks longer than its predecessor, with multiple instrumental interludes intersecting with stories of class disparity, romantic detachment, and family. I discussed the songwriting process and the content of Sunbather with vocalist George Clarke after the band played a one-off show in Brooklyn.

You told me there will be seven tracks on Sunbather, including three interludes. Can you talk about the lengths of the songs, the sequencing of them, and the nature of the interludes?

GEORGE: For this album, we knew the songs would be lengthier simply because that’s how they were coming out. A lot of pieces had to be put together to finish the entire idea of what the songs should sound like. The interludes interject between full tracks and guide the album along, in a way. That’s not to say the interludes don’t stand well on their own, but they are purposeful in accenting the full songs.

Is there a conceptual thread tying together all of the lyrics for Sunbather? What are some of the themes you’re exploring?

GEORGE: There are themes throughout each of our releases, but no specific concept. The “Sunbather” is essentially the idea of perfection. A wealthy, beautiful, perfect existence that is naturally unattainable and the struggles of having to deal with that reality because of your own faults, relationship troubles, family troubles, death, et cetera.

You’ve said that, in addition to the record’s harsh, dark vibes, there will be some lush, rock and pop-driven aspects to Sunbather. Are there any particular artists who have influenced or inspired you in this regard?

GEORGE: We’ve been all over the place with our music tastes in the past couple years. There is definitely the constant My Bloody Valentine, Slowdive, Mono influence on this record, but aside from that, I’d say Emperor, Prurient, Russian Circles, as well as newer bands like Merchandise and Weekend. Even bands like Third Eye Blind, Bush, Goo Goo Dolls, and Cranberries had a role to play in making this record.

How did you approach covering “Punk Rock” and “Cody” by Mogwai? Was it always your intention to create a unique representation of the song that wasn’t merely a note-for-note reproduction of the original?

GEORGE: We sought to create something that held onto the sorrow of those original tracks while re-imagining it in our own voice.

You previously recorded with Jack Shirley for Roads to Judah as well as for the Bosse-de-Nage split. At what point in the writing process for Sunbather did you decide that you’d like to work with him again?

GEORGE: Initially, we had a list of people we were wanting to work with and had talked to a few about doing the record, but after we did the Mogwai cover with Jack, it just made sense that to produce the best album, we needed to be somewhere that was comfortable and trusted. Not to mention, he is very talented.

As there are only two members in Deafheaven contributing to the creative process on Sunbather, what are your thoughts on the challenges in having to assume greater songwriting responsibilities? Would you say that there’s more cohesiveness between the two of you than there would be with additional members?

GEORGE: Truthfully, we wanted to work with other people, but with various conflicts, there was a point in the writing process where we just said,”Fuck it, let’s just do it ourselves. We’ve done it before and we can do it again.” Of course, this was a pretty massive challenge. Musically, Deafheaven rests mainly on Kerry [McCoy]’s shoulders, and when there is pressure to outdo your last record while having no one from the last record with you, it can be daunting. He handled it well, though, and we pushed through the struggles of tying everything together. As far as him and I’s relationship, there is definitely a high level of cohesiveness. If there wasn’t, we couldn’t have lasted this long.

Can you describe your typical songwriting process? Did it change in any way from that of Roads to Judah?

GEORGE: Only in that it was just us two writing the entire record. Because of this, Kerry sat down by himself, writing multiple guitar layers using a loop machine. Once most of the songs were constructed, we sat down with Dan [Tracy] and he added his own drum style to already-constructed song skeletons.

Nick Steinhardt of Touché Amoré designed the cover art for Sunbather. How did you guys end up working together? Did you approach him with a specific thematic vision of the record’s art, or did you leave most of it up to his interpretation?

GEORGE: We’ve been friends with Nick for a few years and have worked together on design projects previous to this one. He did the album layout for Roads to Judah as well as a few merchandise designs. I like to think that him and I have a very similar aesthetic vision. I came to him with a lot of different ideas and we eventually agreed on one. He’s very skilled in making something that’s interesting and yet retains a classic feel. This album cover is the best piece of imagery we’ve ever used.

All of your songs are fairly complex structurally. When you start writing, do you envision a sketch or outline of how you’d like a song to progress, or does it continually evolve on more of a part-by-part basis?

GEORGE: Kerry is better fit to describe this process, but I think he starts out with one or two riffs that eventually grow into a piece incorporating multiple elements that then morphs into a full vision of how the song will flow. As a songwriter, I think his best attribute is his ability to flow with key changes and recognize similar patterns in different styles of music. Because of this, he’s able to write long songs that don’t lose a listener’s interest.

At this point, how much is left in the process of completing Sunbather? Does Deathwish have any special vinyl releases planned?

GEORGE: Just finishing the mixing and mastering and from there, the promotional part begins. We haven’t discussed specifics with Deathwish when it comes to the release, but I am very happy with the album layout, and it will be released on a double LP.

Thank you to George for making the time to reply to my emails. Deafheaven will embark upon a European tour near the end of April, with the release of Sunbather, on Deathwish Inc., tentatively scheduled for release sometime in May. In the meantime, look into Roads to Judah or the band’s split EP with Bosse-de-Nage, or download “Violet” on Deathwish’s newly released label sampler.

Anthony Glaser is a writer, blogger, and journalism major from Long Island, New York. Formerly the interviews editor at National Underground, he contributes to Substream's web and print editions. He spends the average day working, writing, playing video games, listening to Converge, and watching The Sopranos. He likes cats. Follow him on Twitter. END_OF_DOCUMENT_TOKEN_TO_BE_REPLACED
This entry was posted on Monday, March 11th, 2013 at 10:57 pm and tagged with black metal, bosse-de-nage, Deafheaven, deathwish inc, hardcore, jack shirley, post-hardcore, Roads to Judah, sunbather and posted in Interviews, News. You can follow any responses to this entry through the RSS 2.0 feed.
« Review: Luther – Let’s Get You Somewhere Else
From the bottom of my heart, thank you… »