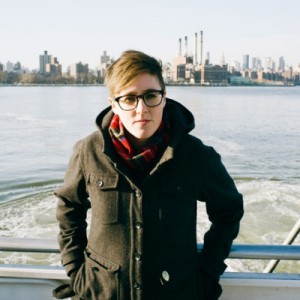 Say What You Mean, Allison Weiss’ sophomore full-length and first for No Sleep Records, is a memorable collection of breakup songs, with the same expertly crafted balance of  infectious hooks and emotional fragility found on any of Tegan and Sara’s better albums — the two even share a limited edition 12” split, in addition to an affinity for Taylor Swift. The 26-year-old is also remarkably funny, which makes her live set — and Twitter feed — all the more entertaining.

Allison, originally from Georgia and residing in Brooklyn for only a few more days, is Los Angeles-bound for now, but she’ll return to Brooklyn for a show at the Knitting Factory with Austin Lucas and PJ Bond on Dec. 10th.

Allison and I discussed her songwriting evolution, the lengthy search for a record label, and her upcoming move.

You played here at the Knitting Factory several weeks ago with Laura Jane Grace. How did you end up on the lineup?

ALLISON: It was sort of a really cool situation where Laura started following me on Twitter recently. That was cool, because I already followed her. I saw that she announced that she had some upcoming tour dates in my area, and I just sent out a tweet that was like, “Hey, if you need any support for the New York shows, I’d be happy to do it. I’d love to share a bill.” Or something. I probably phrased it cooler than that. And she was like, “Oh yeah, that would be rad.” And so my people contacted her people, and everyone made it happen. It was really cool to be a part of that.

During live sets, you’ve played both solo, acoustically, as well as with a full band. What are some of the perks and drawbacks to each?

ALLISON: With a band, that’s the way that I intended the songs to sound, so that’s obviously really fun. Ever since I was a kid, I always wanted to be in a loud, fun rock band. But I also started out solo because I didn’t know anybody who could play with me. Playing solo is really fun because I’m extremely comfortable doing it, and it’s also cool because there’s a lot more spontaneity involved, I think. With the band, we plan things out, we have transitions between songs, because I want a creative, fun live show. When I’m solo, I sort of just do whatever the hell I want for 30 minutes.

Your earliest material was composed and performed entirely by you. How has having a full band behind you now influenced your songwriting?

ALLISON: My record that I just put out was pretty much made by me and my friend Chris Kuffner, who produced it. He and I wrote all the parts together. Even though it wasn’t written by a band together in a room, we definitely wrote it with a band in mind. It’s different because in the past, songs started out with me playing acoustic guitar. I did have a band when I lived back in Georgia, and we would sort of figure out songs altogether as a unit. But on this most recent record, the songs started as band songs. It was a lot less just putting other instruments in a song that already existed, and more building a song from the ground up.

Although Say What You Mean was released this April, according to the liner notes, the album was recorded throughout 2011. Were there any particular obstacles delaying its release?

ALLISON: For the most part, it was the fact that we made this whole record, and then I was ready to put it out by myself. I was advised by some smart people, don’t put it out yourself. I’ve already released a bunch of records all on my own. Say What You Mean is sort of the record that I really wanted to take things to the next level with. I wanted to put it out like a legit band, a professional musician, the real deal sort of thing. So I met up with somebody who was a publicist and they strongly advised me to find management and find booking and potentially even find a label to help release it, so that’s how I got involved with No Sleep. Basically, the whole year in between recording it and putting it out was figuring out how I’m going to put together a team to help me really promote this album and take the career to the next step.

Several months before the album’s release, you signed to No Sleep Records. Can you talk about the signing and what your experience on the label has been since then?

ALLISON: It’s been great. No Sleep is a really nice, small label. It’s a cool place to have released my first record, and I feel like I really respect what they’re doing. It’s nice to be a part of a little family, kind of. I was always afraid of being on a record label, but I’m really thankful for all of the things that they’ve done for me.

“I Was an Island” appeared on your first full-length, Was Right All Along. Why did you re-record it for Say What You Mean?

ALLISON: “I Was an Island” was cool on the first record. It was a quiet little thing. I had recently started playing with a band, and we were sort of like, “What if we played this like a really fun, big, Weezer-style rock song?” So we were doing it live. When I first started working with Chris Kuffner on Say What You Mean, we were really just going to do three or four songs, and that was one of them. I thought it would be cool to redo it and see how it sounded, and it ended up being cool enough that I wanted to put it on Say What You Mean.

The beginning of Say What You Mean seems to have come from a place of confusion and disbelief, but the end is rather accepting, and the songs in between span post-breakup themes as well, I think. How does the sequencing of these songs on the record compare to the order in which you wrote them?

ALLISON: Some of the songs were written a really long time ago, and some of them were written super recently. I wrote the majority of them over a year. There were a couple really old ones on there. When I put them together in a sequence, I wanted it to feel like that. I had just gone through this really intense breakup and was getting over it. A lot of the songs are about that, so I felt that this record needed to reflect the end of that relationship. And I’m glad that you felt that way about those songs, because I definitely agonized over the sequencing of it for a couple weeks, and I’m glad that the order worked out the way that I wanted it to.

On Warped Tour, you spoke out against animal abuse for PETA. How did you get involved with the organization?

ALLISON: A friend of mine from Kindergarten now works at PETA. We recently reconnected on Facebook dot com and I thought that it was really cool. She asked me if I wanted to be involved, and then PETA2 was really active on Warped Tour, so it all fell into place after that.

The video for “Making It Up” features a series of flashbacks showing a former relationship, not with a person, but with a dog named Scott. Can you talk about the process of creating the video?

ALLISON: The video was an idea that I had for quite a while and I had been talking about with the director, Kristen Winter. It was a total blast. The hardest part was definitely finding that dog. Eventually we found this wonderful guy named Leroy — the dog, the guy’s a dog. He wasn’t a trained dog or anything. He wasn’t a dog actor. A friend of a friend had a dog who was pretty well-behaved, and he turned out to be really great. I loved it. It was so much fun. It was definitely difficult trying to get him to sit down across from me at a table and have a serious conversation, but I think we pulled it off.

You’re releasing a split 12”, a Daytrotter session, with Tegan and Sara. How did the collaboration come about?

ALLISON: I’m not even sure if Tegan and Sara had anything to do with it. I think it was purely a Daytrotter thing. Daytrotter, I guess, is on number 16 now of this thing they do where they take two artists who have done Daytrotter sessions and they press those sessions on vinyl and they call it a split. Like a recent one was Into It. Over It. on one side and Daniel Johnston on the other. So they took my session that I did this year in March, and they took Tegan and Sara’s 2010 session, and they decided that they would fit really well together. And so as a result, I now have a split 12” with Tegan and Sara, which is pretty cool.

Would you welcome the opportunity to perform one of your songs with Taylor Swift if she invited you onstage?

ALLISON: A billion percent yes. I love Taylor Swift. I think that people are too mean to her, and she’s just a regular girl trying to live her life, and she’s got a lot of feelings, and I respect that. I would love to be onstage with her singing a breakup song.

What song would you like to do with her?

ALLISON: Oh man. I feel like Taylor Swift would be really into something like “Making it Up.” She likes those songs that are sort of like, “You did me wrong, but I know about it.” You know what I mean? She’s not an idiot, that Taylor Swift. So probably a song like that.

You said that you’re not going to be a resident of Brooklyn for much longer. Where are you moving?

ALLISON: I’m going to be moving to Los Angeles in November, pretty much just because the weather’s nice and I want to have more space. I grew up in Georgia where I had a backyard and water and a lot of space and a lot of outdoors. I’m hoping to find more of that in California.

Anthony Glaser is a writer, blogger, and journalism major from Long Island, New York. Formerly the interviews editor at National Underground, he contributes to Substream's web and print editions. He spends the average day working, writing, playing video games, listening to Converge, and watching The Sopranos. He likes cats. Follow him on Twitter. END_OF_DOCUMENT_TOKEN_TO_BE_REPLACED
This entry was posted on Wednesday, October 30th, 2013 at 9:46 pm and tagged with allison weiss, laura jane grace, No Sleep Records, taylor swift, tegan and sara and posted in Interviews, News. You can follow any responses to this entry through the RSS 2.0 feed.
« From the bottom of my heart, thank you…