Bands You Need To Know- Shores 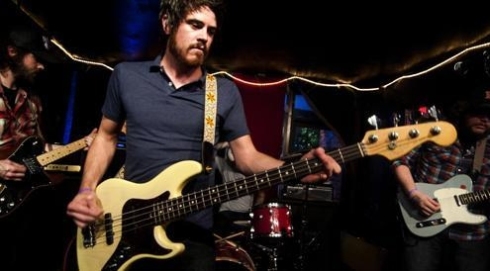 Shore’s first release, Coup de Grace, came out last year on No Idea Records. Compared to other records that are released by the label, there was little fanfare and/or attention. Which is a shame because the album is so stunningly good. The album is quiet, loud and moving in all the right places. The music is a perfect soundtrack for that reoccurring dream where you are laying down on a glacier and just slowly drifting along the Northern Atlantic.

From reading Shores’ tumblr page, their writing process consists of being locked in a room, during the coldest months that the Michigan winter has to offer. As the snow and wind beat on the outside, the band is busy writing away on the inside. From their isolated and frigid experience, the band will releasing two more records later this year through No Idea; a split with Charles the Osprey and their second full length titled To Volstead.

Shores was amongst my favorite performances from last year’s Fest and without a doubt, I will plan to see them again at this year’s FESTivities.

The band will also be doing a small set of tour dates this summer;

This entry was posted on Monday, June 27th, 2011 at 3:00 pm and tagged with charles the osprey, coup de grace, florida, gainesville, glaciers, michigan, No Idea records, Shores, slowdive, the fest, tumblr and posted in New Music, News. You can follow any responses to this entry through the RSS 2.0 feed.
« Hostage Calm Offering Free LP Download For Supporting Gay Marriage in NY
Capsule – No Ghost »